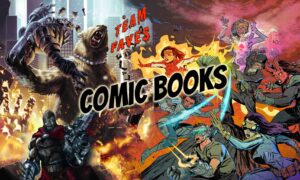 To kick off the new year, the SBT crew is pleased to launch a new blog type — Team Faves. These round-up posts feature real answers from real members of our team. Reading Team Faves is a great way to get to know us, and hopefully have fun doing it! Plus, you might get some great recommendations along the way. This month, we asked our team to tell us about their favorite comic books. Their answers did not disappoint…

“Watchmen was one of the first comics I really got into and invested time in. The art is amazing and the cast of characters were varied and flawed as fuck. Each one had something that made them amazing but also made them suck in a way that made you feel that they could be real people. The story is fantastic and I had never seen the format of drawn panels interspersed with full written passages before (in-world newspaper articles and passages from in-world books, etc). And Rorschach…that’s all. Rorschach.” — Gary Furlong, Narrator

“Preacher has been my standout favorite comic over the past couple of years. I have it in three gigantic Absolute Editions, complete with faux leather binding, and they were a blast to read. It’s written by Garth Ennis, with the majority of the art done by the late Steve Dillon. Garth started writing this comic shortly after his run on Hellblazer (Constantine’s book, for those of you who don’t know). Steve was working on the same series, so that kicked off their friendship and working relationship, and really that series was a major influence on Preacher as a concept.

Preacher is about Jesse Custer, a man from Texas who has had a hard life, and has discovered that he can command people by looking in their eyes and using, presumably, the voice of God. One day, while preaching, something blows up his church and, with it, his congregation. But he’s left relatively unharmed and angry. This starts his mission to talk to God himself to ask those cosmic questions we’re all so familiar with.

Although the premise of asking God why he allows bad things to happen seems pretty silly to me, the ride is a fun one. We have great characters, like Arseface, the boy who blew his own face off, The Saint of Killers, a supernatural cowboy filled with rage who can’t be hurt with absurdly powerful six-shooters, and Cassidy, the drunken Irish vampire. This whole series is hilarious, crude, over-the-top, insane, ultra-violent, lewd, and it still manages to be moving. The art is iconic, with some of the best ‘acting’ I’ve seen from characters, and it perfectly captures the tone set up by the writing and the setting. This series also cemented Garth Ennis as my favorite comic writer.” — Jeff Hays, Fouding CEO & Lead Narrator

“It’s hard to pick an all-time favorite, but the one I can’t stop talking about right now is Stray Dogs, a chilling thriller told through the eyes of dogs. I love how the way canine memories work is used as a major plot device, and the character development is really impressive, especially given the premise. It is both hilarious and chilling, and yes, I both laughed and cried while reading it. The primary author and illustrator, Tony Fleecs and Trish Forstner, are probably best known for their work on My Little Pony. Who knew the My Little Pony crew had such dark imaginations?! Actually, what am I saying? It makes perfect sense.

As an added bonus, I picked this one up on a Forbidden Planet run with Jeff and Ahmed when Jeff was visiting, so it has sentimental value. Jeff actually picked it out for me because he thought it would be right up my street. He was right!” — Emily Labes, Director, Marketing & Communications

“My fave is The Dark Knight Returns. I remember reading that as a kid and being amazed at Frank Miller’s work. The rivalry of Batman and the Joker is resolved. Superman is made into the government’s tool and is hunting vigilantes. And an older, more violent Batman must take him on in the finale. He comes up with an elaborate plan to trick Superman, and ultimately bests him. The art was often painted, and I had never seen Batman in that light before. Zach Snyder included some elements from this comic in his Batman V. Superman, though I think he diluted the whole message. Batman fought for the little guy, while Supes fought for the government. It’s a great analogy for our world today. And though Batman is the opposite of a cop, he was shooting thugs with rubber bullets in his Bat Tank…” — Ahmed Mahmoud, Director, Sound

“While I had enjoyed comics in the past, it wasn’t until I read Ultimate Spider-Man that I really loved them. Marvel’s ‘Ultimate’ universe was created to give old characters new direction while maintaining their identity. In Ultimate Spider-Man, we’re given new origin stories, character rewrites, and sometimes bizarre story directions but it all served to give an emotional backdrop in a way I hadn’t seen before. Eddie Brock and Peter Parker’s fathers had worked together create a cure for cancer, but the result of their work was the Venom symbiote that challenged the relationship between their children. Ultimate Spider-Man also introduced Miles Morales, a beloved character who was inspired in equal parts by the actor/musician/writer Donald Glover, and by Brian Micheal Bendis’ desire to create a character his blended, multi-racial family could identify with. I revisit the series often, and it’ll always hold a special place in my collection.” — Nick Shoup, Sound Engineer

“My all-time favorite is a title that wouldn’t normally fit my wheelhouse on the basic premise alone: Eyeshield 21 is a coming-of-age story centered on an introverted Sena Kobayakawa, who reluctantly becomes the running back on the American football club’s team. I’m not really into sports, especially football, and coming-of-age stories tend to be a dime-a-dozen; but, Eyeshield 21 has something special. It has a well-written story, despite its relative lack of sci-fi and fantasy elements that I usually crave, and a great balance of serious and silly. All the characters are unique, with their own troubles, and they grow in their own ways throughout the story. The art alone sends my heart singing and inspires me to be a better artist — the insane attention to detail; how all the characters are totally unique; the dynamic, action-driven poses and costumes; and how consistently good the art is across the whole series despite the pressure that manga-ka’s usually face.” — Zombie, Customer Experience Manager

It probably won’t come as a surprise that a team that loves comic books this much has produced some awesome comic- and superhero-inspired series, like Savage Stories of Necessary Evil, Mega Mech-Apocalypse, S5E, and the first-ever Soundbooth Theater Original, Space Buns, all of which are available on SBT Direct. If you’re a fan of comics and/or the superhero genre, we highly recommend you check them out!