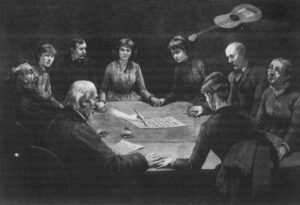 A sketch by artist, Frank Leslie, of “a séance conducted for the entertainment of a party, by a widow lady, who is an eleemosynary interpreter of communications from the world of shadows.” The artist was completely skeptical. From Frank Leslie’s Illustrated Newspaper, April 2, 1887.

Our newest Cinematic Audio serial, Seance: High Falls, is set against the backdrop of the real-life popularity that the spiritualism movement enjoyed in the 19th century. In this informative guest post, Mark Harris, the series’ writer, breaks down what led to the rise of America’s fascination with the occult, and the famous mediums of the time who inspired his characters.

The Rise of Mysticism

The 19th century spiritualism movement centered on mediums who claimed they had powers to communicate with the dead. Self-proclaimed psychics invited willing participants into their parlors to speak with deceased relatives, spouses, and friends. The spirits responded with “raps,” knockings on the wall, floors, or tables. Believe it or not, this movement was enormously popular. One critic admitted:

This movement certainly resembled a religion in many ways. But in mid-19th century America, people were driven more and more to question beliefs. Science, discovery, and rational thinking were all the rage (Moore, 478). So how did a movement based on talking to ghosts thrive at a time when people were fascinated with science?

In fact, there are many factors that contributed to spiritualism becoming one of the most dominant forms of entertainment of the day. Here, I’ll discuss three of those factors through the story of the two teenaged girls who inadvertently kicked the whole thing off.

1848. Hydesville, NY. It all started with a prank. 15-year-old Margaret Fox and 12-year-old Kate Fox fooled their superstitious mother with a simple string tied to an apple. At night, the two girls would bump the apple on the floor, causing what came to be known as a “rapping” sound throughout the house. Their mother investigated, but could not find the source of the sound. The sisters continued their fun, claiming the source of the rapping was a dead man buried in their basement. Soon, the rapping began responding to questions with shocking accuracy.

According to David Chapin, author of The Fox Sisters and the Performance of Mystery, friends and family joined the investigation and — before long — the phenomenon grew by word of mouth, until hundreds came from miles away (Chapin, 163). The girls’ older sister, Leah, quickly sussed out the scheme; but instead of ratting her sisters out, she went into business with them. By 1849, the three sisters were able to hold their first large public séance demonstration at the greatest venue in Rochester, NY. An ad in the local newspaper read:

“Let the citizens of Rochester embrace this opportunity of investigating the whole matter, and see if those engaged in laying it before the public are deceived, or are deceiving others, and, if neither, [let them] account for these truly wonderful manifestations… Come and investigate. Price-25 cents.” (Chapin, 174)

Traveling exhibits of newly-discovered phenomena were quite popular at the time. “Professor Rogers” showed off the new pseudosciences of phrenology and mesmerism, promising their accuracy. “Miss Bertha,” the clairvoyant, claimed to “read without eyes.” “Dr. Dods” insisted he could cure diseases with “Electrical Psychology.” Many of these acts generated controversy in the form of letters to local newspapers and attacks from clergy (Chapin, 174).

Their contemporaries agreed; the (in)famous P.T. Barnum claimed that Americans enjoyed the “intellectual exercise” in figuring out a mystery. He claimed that people loved “… ‘the continual appearance of new marvels [and also] to a jargon that concentrated on methods of operation, on aspects of mechanical… construction, on horsepower, gears, pulleys, and safety valves.’” (Harris, 74) So, Barnum created “… a space wherein people could play with the boundary between marvel and analysis and between credulity and skepticism.” (Walker, 40)

In fact, Barnum so believed in this principle that he regularly published newspaper articles debunking his own shows! For example, one of his acts featured a supposed mermaid, so Barnum published editorials from doctors claiming the sea creature was a fake. “’When the doctors disagree, the people must decide for themselves…’” (Walker, 39) The implication was clear: curiosity and debate sold more tickets than certainty.

At times, skepticism not only sold tickets, it created new believers. One skeptic, Charles Lee, set out to reveal the Fox sisters as frauds through public demonstrations. But to his chagrin, his demonstrations often had the opposite effect:

“’What was very ludicrous, however, was that several in the audience, who now for the first time had witnessed anything in the ‘spiritual knocking’ line, and had remained skeptical, now became zealous converts to the doctrine of Spiritualism, and still refer to my exhibition as the strongest kind of demon-strative argument in its support.’” (Walker, 30-31)

R. Lawrence Moore asserted that spiritualism provided a new way of viewing religion, not through blind belief, but through the very modern methods of scientific experimentation (Chapin, 159). As Chapin observes, this approach allowed audiences to become active participants in the stories that mediums told through their seances.

A good deal of entertainment involves audiences sitting in seats passively, while performers are tasked with the active role of entertaining. In our own time, we’ve experienced both passive entertainment, such as movies or television, and the rise of interactive entertainment. Now, the internet allows audiences to participate in stories by commenting in real-time, creating memes and fan fiction, and by engaging in controversies associated with these works.

In the 19th century, spiritualist seances provided the same kinds of participation audiences craved — the same opportunities to show off their own knowledge and assert their own opinions.

Using Gender Prejudice to Their Advantage

The Fox sisters further broadcasted this “come and investigate” mentality by playing their role as demure, unassuming young women in a male-dominated society to their benefit. D.M. Dewey, editor of The Rochester declared, “’It would be more difficult for us to believe that either of the two girls sitting before us were practicing deception and trying to humbug us, than to believe that the knocking was supernatural.’” (Chapin, 185)

Many believed the sisters couldn’t comprehend their own spiritual abilities. One observer said that Kate Fox knew nothing more about the phenomena she channeled than a “canary bird” (Chapin, 181). Others were too hung up on the girls’ pleasing physical appearances to wonder if they might be swindlers. Nathaniel P. Willis said the sisters were “prettier than average” and displayed “good-humor and simplicity.” A writer for The Herald noted that Maggie Fox was “‘a very pretty, arch-looking, black-eyed, and rather modestly behaved young girl.’” (Chapin, 181) Chapin further asserts that the girls “… actively created themselves as passive objects of investigation… a role that conformed well with the 19th century beliefs about gender.” (Chapin, 185)

The Fox sisters were wily enough to allow the men who “came and investigated” to believe that such unassuming, pretty young women simply weren’t capable of fooling them. Even vehement skeptics, like Captain Isaiah Rynders, seemed taken in by the sisters’ demur posturing. Rynders went to see the Fox sister to debunk them but later wrote, “‘If they humbug you, they do it in the most amusing and agreeable manner…’” (Chapin, 183)

The Rise of Mass Media

The final ingredient that contributed to spiritualism’s success was the rise of the penny press, which was exactly what it sounds like: newspapers, circulars, and periodicals that sold for a penny. Most other newspapers at the time sold for six cents. So, for the first time, the penny press made news available to just about everyone in the rapidly-growing middle class.

In hindsight, the success of the penny press feels almost inevitable. As more people joined the middle and working classes in the 19th century, they gained more disposable income. They also gained an increased hunger for news, entertainment, and gossip. At the same time, newspapers went from being hand-printed to being mass produced by steam-powered printing. Finally, advertisers began to realize the value of print ads, giving the penny presses a financial interest in circulating as widely as possible, in contrast to the more traditional subscription-based newspapers (Wikipedia, “Penny Press”).

You’ll recall that the Fox sisters’ first Rochester invitation appeared as an ad in the local paper. Furthermore, most of the surviving praise and criticism of the sisters cited throughout this piece came from newspapers. The penny press became a widespread and influential mass medium perfectly suited to drawing crowds to spiritualist events and amplifying the controversies those events generated.

New episodes of Séance: High Falls launch on SBT Direct every other Thursday. Listen to the first episode for free. No account needed to listen to free content.