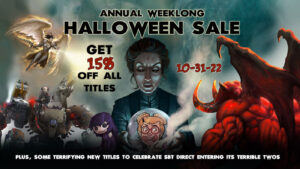 Another All Hallows’ Eve is upon us, and so too, is another important birthday for SBT Direct. Since we started selling titles directly on our website our catalog has grown exponentially and we’ve learned a lot in the process. Perhaps most importantly, our app has undergone a complete transformation — more on that later.

If you’re wondering what set us on this madcap independent distribution journey, our Founding CEO & Lead Narrator, Jeff Hays, wrote a heartfelt, in-depth blog post on the subject. But as excited as we are about how far we’ve come, we’re even more excited about where we’re going. If the past few months are any indication, our twos won’t be so terrible after all.

How We’re Celebrating This Week

Our annual birthday sale is in full swing and will last Monday, October 31st 2022 through Monday, November 7th, 2022. All titles purchased through the website will automatically be 15% off. Unfortunately, in-app purchases are not among the massive improvements we made to the platform, but maybe someday…

We’ve also got three spooky new titles to send chills up your spine:

Lastly, it wouldn’t be a Soundbooth Theater birthday party without some livestream action. In addition to our regular birthday episode of Soundbooth Theater Live! at 8:00pm ET/7:00pm CT, we’re also hosting a daylong takeover of the LitRPG Legion Facebook group. Here’s the full run of show:

It’s going to be a day filled with fun and shenanigans, and we hope you can make it (but if you can’t, you can always watch the videos after the fact over on our YouTube channel).

If you’ve already seen the hilarious video, “Say Goodbye to Audio Deep Dives,” you know that we are no longer calling our immersive audiodramas with SFX and music, “Audio Deep Dives.” Frankly, as fun as it was to say, the name never felt right to us. So, we decided to go with a name that we feel better describes the experience of listening to one of these productions: Cinematic Audio.

Our Director of Marketing & Communications, Emily Labes, discusses the change in depth in another recent post, “What’s in a Name? What Cinematic Audio Means to Us.”

The Moment You’ve All Been Waiting for: What to Expect from our Shiny New App

As soon as you open the new version of the SBT Direct app, you’ll notice that it just feels different (better, hopefully). When designing the app, our developers set out to create something dynamic and intuitive. We believe they’ve succeeded!

It’s important to note that many of these improvements have not yet reached the website. But fear not, big changes are coming on that front as well!

SBT Direct 2.0 is just the beginning. We can’t wait to keep refining the app to make it even more user-friendly and interactive. In fact, we’re expecting to push out another fairly substantial update before the end of the year.

With all these changes, the one thing that hasn’t changed is our commitment to producing top-quality audio for truly captivating stories. We have many new great titles on the horizon heading to both SBT Direct and Audible, including new properties as well as new installments of old favorites. Believe it or not, the best, is still, to come.