Emerald; Land of the Elementals, Book 2

Emerald; Land of the Elementals, Book 2

With the defeat of the Elemental, Arbor should be hailed as a hero. Instead, he is shunned, turned away from the Defiants by those seeking power and fearing his own. Having little choice, Arbor sets out with his force of gremlins toward the slave city of Fivora, in the hopes of finally being reunited with his sister.

Meanwhile, strange things are happening in the elven capital of Srila. An Infiltrator is stalking the streets and leaving death in its wake. However, the Infiltrator isn’t the only one with its sights set on the elven homeland. Karria soon finds herself tested in ways she never could have imagined. As enemies close in on all sides, she must find the strength to push through.

The denizens of the underworld are stirring for the first time in thousands of years. Although their individual battles may have ended, the war has only just begun.

Warning: Contains mild profanity, gore, and some content that may not be suitable for children.

Aaron Oster has been a fan of all things fantasy ever since picking up Redwall by Brian Jacques at the age of seven. After that, he began reading (and listening to) every fantasy novel he could get his hands on – spending hours making his mom wait in the car, while he perused the all-too-small collection of books at his local library. Rampage; Land of the Elementals, Book 1 Origin; Land of the Elementals, Book 3 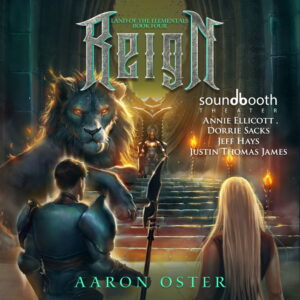 Reign; Land of the Elementals, Book 4