Hollo’s antics land him in jail. Lina Fox is tormented by visions and happenings she can’t control.

Harlan Guthrie (he/him) is a creative, nerdy, medium sized dynamo. He is a writer, voice actor, editor, and creator of a number of different shows and streams. He has a Dungeons & Dragons Actual Play Podcast called Dice Shame that has been featured on Wizards of the Coast Podcasts of the Frostmaiden event and you can find him pulling the strings in the Audio Drama “Malevolent” or streaming Wednesday nights on The INVICTUS Stream. 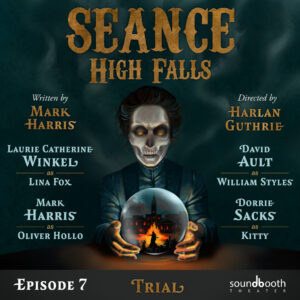 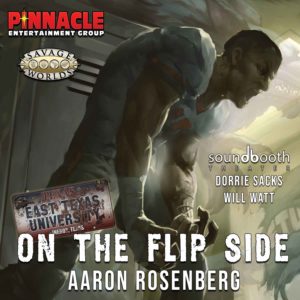 Had me talking to myself on the subway

All hell breaks loose for Oliver and company in this one and the suspense continues to build. At no point during the duration of this episode did I have a single clue as to what would happen next, and one scene actually made me yell “Oh wow” to myself on the train ride to work this morning!

Excellent Production--Plot Could Use Work

I'm really, really hard to please as a listener (review also will contain spoilers). I also critique professionally, and did so in one of the Top 3 writing schools in the USA, so it's gonna be harsh. About 99% of entertainment out there just pisses me off, so with all that said, please take this review with a grain of salt. I'm not your usual listener. If I were completely honest, I'd probably rate this episode a 3 and Episode 1 a 2, but I don't want to tank its rating because the guys involved in production are clearly brilliant in a lot of ways--they're just not doing enough trimming in the original manuscript. Basically nothing happened, story-wise. I didn't feel angry or disappointed--I just felt like it was all filler. [SPOILERS FROM HERE ON, PLEASE STOP NOW IF YOU DON'T WANT SPOILERS] ... We learn very little that was new, and nothing was accomplished. There were 3 new things from last episode. We find out 1) Styles is dead and bound to a rock. 2) Lina Fox can now genuinely speak to the dead. 3) Kitty decides she hates Hollo. These all fell flat because 1) I didn't care about Styles's character, so it wasn't a big reveal. 2) It was pretty much assumed from the ending of the 3rd episode that Lina was now connected to the spirit world from Hollo's fuckup, so again, not a big reveal. 3) Kitty deciding she hates Hollo felt like old-timey forced drama used to ramp up tension, rather than something genuine. When I say nothing was accomplished, yes, there was a jailbreak, but 1) it wasn't difficult (they literally just *told* someone to go free them) and 2) they started the episode not imprisoned and they ended the episode not imprisoned, so it felt like that whole scene could've been cut. The only necessary part (I'm assuming) of that whole jailbreak was the existence of the stone as a binding for Hollo's spirits. Even the fact that Hollo's spirits could possess people was established in prior episodes. So basically, nothing was gained or lost, and then Kitty decides she hates Hollo because reasons. (No real foreshadowing of her unwillingness to deal with Hollo's antics before this...she actually seemed pretty tolerant of him before now, so again...forced) It all felt too easy, and that the MCs were in no real danger or hardship the entire time, despite being in jail for potential murder. I was waiting for something to happen--it's like that lull in a story where you're waiting for the action to start again. Buuuuuut since this is an individual episode that you have to pay for, I have a feeling a lot of people will stop here, because it just felt anticlimactic. Literally filler. That said, it *shouldn't* have felt like filler. The quality of the production is amazing. The voice acting is amazing. The research and true-to-period style is amazing. Unfortunately, people don't buy these things for the sound effects and style--they buy them for the story, and my honest opinion is that the story itself needs a lot of tightening and plot development. Hollo is a great character. Kitty is a great character. I would've liked to see them actually do something to free themselves, rather than just tell someone else to do it--I believe that would've been a lot more satisfying. Also, I'm gonna go out on a limb and guess here, but I'm thinking Lina Fox is being set up as the Messiah (or antiChrist, or whatever you want to call it) and she fully intends to use her newfound powers and combine them with her history as a con artist to become some religious cult leader (with the intent of taking over the world as the new coming of Christ) that Hollo has to stop. But if they're setting her up as an antag, she's *not a good one*. At least not yet. She literally hasn't *done* anything antagonistic to the protag. She literally *gave* Hollo a platform upon which to perform and gain a following and prove he was better than her. So yeah, I'm going to buy the next one, but I consider this episode basically filler, which means the next episode cost me $3.98 (assuming it has thrilling content like 2 and 3). I want to see more Hollo doing cool and unique things, less Lina and her power struggles. That's not interesting to me, because the stakes are so low with Lina. (It's a tiny town that probably doesn't exist, taking place 200 years ago, where the biggest stakes thus far are whether or not a mill will be built or people will be allowed to drink.) The Hollo episodes have been enthralling. The ones focused on other characters have not. I sincerely doubt I'm the only one having these issues, but like I said, I'm very, very hard to please in an entertainment sense, and literally it might just be me. Hope someone else has some better feedback.

Of course some type of tragedy has to occur. Lena should blame part of this on herself for Styles death. Had she not been a greedy little whore, her close friend would still be among the living. Kitty may be the character I like. She seems to be the smartest one in the bunch not letting things get out of control. Lena who was so strong and over confident being a fake medium now an actual psychic and she seems to be cowering at her new abilities. She likes to play pretend but not actual play. My thoughts I think it is so basic that him summoning “Jesus Christ“ creates this type of back lash that “awoken” Lena. I don’t think he actually summoned Jesus. There was no proof! For this episode to be so short I expected more of a Jam Pack of dialogue. The story is falling flat for me. This episode could be condensed and added to another episode. I really was having high expectations for this series and want to give it my full support. It’s getting a little hard. I still feel somewhat invested. But please pull me in more with dialogue. I don’t like they way the story is unfolding and the drawn out scenes.. Prediction Not much happened for me to review. What I see happening next is Lena trying to figure some way to get Styles back. Her still being unable to control her new powers and unleashing something. We shall see.