Tales from the Battered Mind; Episode Seven, “Fairy” and “The Sheet Charmer of Broketoe”

Tales from the Battered Mind; Episode Seven, “Fairy” and “The Sheet Charmer of Broketoe”

Dallas Kay is a prodigy. A phenomenon. A pain in the ass. As a wunderkind pilot for the Utopian Space Corps, Dallas can do no wrong… Or can she? Faced off against the greatest pirate the galaxy has ever known, a pilot with skills that rival her own, Dallas finds herself in hotter water than ever. Will her skills at the throttle save her ass yet again, or is she doomed to be a desk jockey the rest of her life? Or maybe an icy ball of space wreckage, floating in space to bump against some unsuspecting trader’s front windshield… That too.

This short story is set in the Millennium Potion universe, using characters from the books.

“The Sheet Charmer of Broketoe”

Nerys Ganlin is an untrained auldling of vast power, a forgotten class of Auld the likes of which hasn’t been seen in many generations — whose magic unfortunately only works on cloth. Crippled as a magic user, faced with a terrifying threat of a soul-thief from ancient lore surfacing in her tiny town, with all other help vanquished or too far away to arrive in time, can Nerys alone conquer her handicap and save her village… or will she lose everyone she loves in the battle that follows?

Set in Sara King’s Aulds of the Spyre fantasy universe. 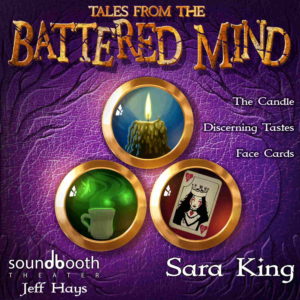 Tales from the Battered Mind; Episode Three, “The Golden Directive and The First God of Fire“ Tales from the Battered Mind; Episode Four, “The Gnat Hunters” Tales from the Battered Mind, Episode 8: Lullaby at the Rubble Heap and Dead Tired

Bonus stories from some book faves!

Fairy is a bonus for Wings of Retribution and the Sheet Charmer is one character’s backstory from Form and Function: Aulds of the Spyre series. Each of these stories will give you a great taste of what’s in the book. I love being able to listen and have the same emotions come across as they do when I’m reading the story.

With salt of the earth villagers. Thrills, chills and heart-throbbing fear and suspense .Fun ending!

Good job!!!! Can’t wait to hear more But The fairy story was too short I thought I was just getting into it I do want to here more of that story sounds very interesting I give it 5 stars